Fuddrucker's - Home of One of My Favorite Burgers 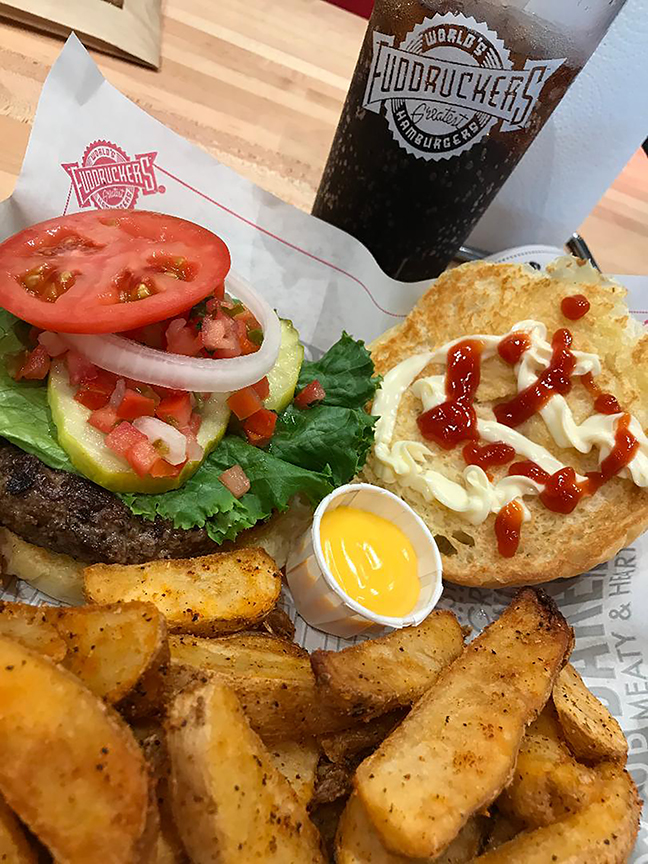 I’ve eaten a lot of burgers in my time - from little mini sliders to sloppy sandwiches that leave you with toppings oozing down your arms to sophisticated gourmet versions in swanky spots. One of my favorite ones from my childhood remains a favorite today - Fuddrucker’s.

When I was a kid we just didn’t dine out very often. Fast food and fast casual places weren’t as prevalent as they are now, mom was a good cook who liked to prepare meals for us and we were a big family and dining out was an occasional treat. If our family dined out, we went one of three places - Carlo Lorenzetti’s in Chicago Heights for a good Italian feast, Ponderosa for a steak and big salad buffet or Fuddruckers for burgers. The “World’s Greatest Hamburger” chain opened in 1979 in San Antonio, Texas and has now been serving up their fresh burgers for 40 years.

When I was growing up, our family visited the location in Calumet City. It has since closed, but thankfully a location remains in Matteson, the only one in Chicago’s South Suburbs. Today there are about 150 locations across the U.S. and beyond. You’ll find Fuddruckers across the globe - in Saskatchewan, Canada; Yucatan, Mexico,; Saudi Arabia, Kuwait, Africa and many other locations far, far from Chicagoland.

So many eateries that serve burgers now resort to serving frozen patties and well, I just can’t. There’s such a difference in a burger made with fresh beef. And at Fuddrucker’s, it can’t get much fresher. The meat is ground in the restaurants and the buttery buns are made fresh there as well and then toasted. Throw in a condiment station where you can select your own freshly sliced tomatoes and onions and crisp, fresh lettuce and it’s about as close to perfect as you can get in a burger.

One other thing I love about dining at Fuddrucker’s are the seasoned potato wedges. Along with the condiment bar are ketchup, mayo, barbecue sauce and warm cheese - both cheddar and a spicy version. I could eat my weight in potato wedges dipped in their warm cheddar sauce. Oh, and if you have room left, they have delicious cookies and brownies that are freshly-baked in-house, too.

Fuddrucker’s was also one of the first places in the area to introduce the Coca Cola Freestyle machines where you can select from a huge number of soft drinks - or combine them in one glass if you wish. It's where I first fell in love with Vanilla Coke.

I loved Fuddrucker’s as a kid and I love it even more now. As a grown up, I’ve now taken my dad there for lunch many times and I bring my own boys there on occasion, as well. (*Pro tip: Get on their e-mail mailing list as they frequently send special offers and buy-one, get-one free deals).

If you’ve never been to Fuddrucker’s, I urge you to go try it out. In a world saturated with flimsy, frozen, fake hamburgers, Fuddrucker’s is a breath of fresh air. They’re making burgers the way they should be made, just as they’ve done since the beginning - and as they’re continuing to do for the next generations.